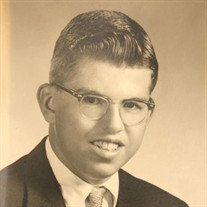 Robert Wayne McDonald passed away on Friday, May 22, 2020 at NCMC, he was 80 years old. Robert (Bob) was born in Grove City, Pennsylvania to Solon and Edith McDonald on July 27, 1939. As a young boy the family moved to Mt. Vernon, Ohio where he lived for many years and even after relocating to Colorado, he always called Ohio his home. Bob had many fond memories of Mt. Vernon, one of which was the corn cob fights he and his cousins would have on his Aunt Agnes’s farm. As a young boy, Bob survived the Polio epidemic and his first job was a paper route. Having grown into a young man, he graduated from Mt. Vernon High School in 1957 and spent a short time living in Indiana before moving back to Ohio. Bob was a Staff Sargent in the Ohio Army Reserves National Guard from 1961 to 1967. He earned his private pilot’s license in his 20s and enjoyed flying single engine aircraft. In 1968 he married Sondra Caldwell. Bob and Sondra moved to Boulder, Colorado in 1969 where they had his first child, Sherry in 1970. In 1986 he married Rose Driver. Bob and Rose settled in Greeley, Colorado where in 1988 they had his second child, Elizabeth. Bob lived his final years in Greeley, Colorado where his former wife, Rose McDonald helped care for him. During Bob’s career he worked for General Motors, Valparaiso Technical Institute, Cooper-Bessemer Corporation and Rocky Flats. He spent his final working years with Kodak in Windsor, Colorado where he eventually retired as one of their tool and die makers. Bob was a 50 year free Mason, the Rainbow Dad for the Eaton International Order of the Rainbow for Girls and he was also a Past Royal Patron of Amaranth. Bob was an avid hunter, fisherman and outdoorsman. He started hunting as a young boy and kept hunting until a couple years before his passing. He was proud to be an NRA Life Member. At times during his life he enjoyed wildlife photography, researching his ancestry and taking cruises . He is preceded in death by his parents, Solon & Edith McDonald and his granddaughter Mickaily McDonald-Deubach. He is survived by his daughter Sherry Deubach and her husband Kevin. He is also survived by his daughter Elizabeth Mendoza. Grandchildren Kristy, Madison, Melania, Bryana, Benjamin, Gabriella and Maximus along with extended family and friends. Visitation will be from 3:00-6:00 p.m. on Monday, June 1, 2020 at the Moser Funeral Service Chapel, 3501 S. 11th Avenue in Evans. Robert will be laid to rest in Mt. Vernon Ohio next to his parents. A memorial in Mt. Vernon Ohio will be held at a later date due to the Covid-19 Pandemic restrictions. In lieu of flowers, donations can be made to the NRA in his name at 11250 Waples Mill Road, Fairfax VA 22030.

Robert Wayne McDonald passed away on Friday, May 22, 2020 at NCMC, he was 80 years old. Robert (Bob) was born in Grove City, Pennsylvania to Solon and Edith McDonald on July 27, 1939. As a young boy the family moved to Mt. Vernon, Ohio where... View Obituary & Service Information

The family of Robert W. McDonald created this Life Tributes page to make it easy to share your memories.

Send flowers to the McDonald family.