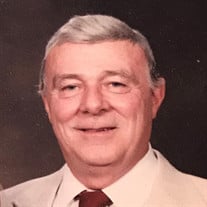 Robert Albert Ritchey, 88, of Greeley passed away on Saturday, September 16, 2017 at The Medical Center of the Rockies. He was born in Greeley on April 2, 1929 to Rolland and Irma (Brubaker) Ritchey. Mr. Ritchey graduated from Greeley High School in 1947 where he met his future wife, Rosemary Tomasek. After graduation, he entered the Navy, where he would serve 3 years. He and Rosemary were married on April 22, 1950. In March 1951, they had their daughter, Deborah Christine. In 1954, Robert moved the family to Anchorage, Alaska. He worked for Pepsi-Cola for 3 ½ years, saving money to open a family business upon returning to Greeley. Shortly thereafter, he and Rosemary opened Ritchey’s Toys & Hobbies in downtown Greeley. It would later become Ritchey’s Crafts & Hobby. They ran the store together for 36 years until their retirement in 1993. He lost his beloved wife on September 23, 2007. Robert had many friends, having kept in contact with many from his youth. He had a kind and generous heart. He loved people and animals, and his dog, Tuffy, was his loyal companion in his later years. He is survived by his daughter, Deborah (Robert) Bierma of Greeley, a granddaughter, Jacinda (Troy) Anderson of Parker, great-grandsons, Deacon & Cooper Anderson, a brother, Lee Richey of South Carolina, a niece, Cindy (Bill) Focht of Greeley, a nephew Steve (Becky) Ritchey of Fort Worth, Kansas, various other nieces, nephews and cousins, and a very special friend, Maria Portillo. He was preceded in death by his parents, Rolland & Irma, sisters, Roma Luark and Nola Jane Collom, his wife, Rosemary and a granddaughter, Allison Bierma. Robert’s wishes were that no services be held. Memorial gifts may be made to the Humane Society of Weld County or Compassion International in care of Moser Funeral Service, 3501 S. 11th Avenue, Evans, CO. 80620. An online guestbook and obituary are available at www.moserfuneralservice.com.

Robert Albert Ritchey, 88, of Greeley passed away on Saturday, September 16, 2017 at The Medical Center of the Rockies. He was born in Greeley on April 2, 1929 to Rolland and Irma (Brubaker) Ritchey. Mr. Ritchey graduated from Greeley High... View Obituary & Service Information

The family of Robert Albert Ritchey created this Life Tributes page to make it easy to share your memories.

Robert Albert Ritchey, 88, of Greeley passed away on Saturday,...

Send flowers to the Ritchey family.