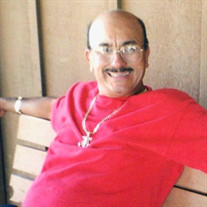 Rogelio “Don Chingon” Barraza, 73, of Greeley passed away on Sunday, December 13, 2020 at North Colorado Medical Center. He was born March 2, 1947 in El Salvador to Maria Barraza. He had lived in Greeley since 1995. On June 26, 1986, he married Josefina Rivera in Los Angeles, California. Rogelio was a hard worker and was employed by AMPCO for 12 years, Monfort Meat Packing for 10 years, Walmart Distribution for 15 years, and Erhlich Toyota for 18 years. He had just recently retired at 73 years of age to do the things he enjoyed which included cars and spending time in his hammock near the river. He is survived by his wife, Josefina Barraza, a son, Rogelio Barraza, Jr., daughters, Xiomara, Merlin, Cristina and Shannon Meracle, a brother, Rodolfo Barraza, sisters, Ana Morena Barraza, Carmen Barraza, and Marina Berrios, and 8 grandchildren, Joseph, Dylan, Kevin, Vanessa, Sophia, Jason, Jack and Joslin. Memorial services will be held 10:00 a.m. Monday, December 21, 2020 at the Moser Funeral Service Chapel, 3501 S. 11th Avenue in Evans, Colorado.

The family of Rogelio Barraza created this Life Tributes page to make it easy to share your memories.

Rogelio “Don Chingon” Barraza, 73, of Greeley passed away on...

Send flowers to the Barraza family.