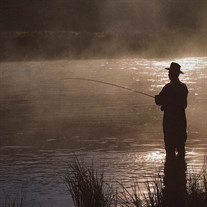 Ronald “Hotrod” D. Eckler, 76, of Greeley, passed away on Friday, September 21, 2018 surrounded by his family at home. He was born December 27, 1941 to Clyde & Dorothy (Hale) Eckler in Fenton, Michigan. On October 14, 1966 he married Carol J. Lemke in Flint, Michigan. Ron moved to Greeley in October of 2016. Music was a big part of Ron’s life. He enjoyed singing, playing the guitar and playing the bones. He like to be outdoors and could be found enjoying some fishing from time to time. Most of all, he enjoyed spending time with his family. Ron is survived by his sons, Ronald (Samantha) Eckler II of Naples, Florida, and Mark Eckler of Flint, Michigan, his daughters, Kelly Eckler of Greeley, and Kimberly (Jon) Reddell of Greeley, Colorado, a sister, Carol Meinburg of Grand Blanc, Michigan, and 2 grandchildren, Carolann and Jacob Reddell. He was preceded in death by his wife, Carol Eckler, his parents, Clyde & Dorothy Eckler, a sister Delores Cooper, and 2 brothers, Glen and James Eckler. Private family services will be held at a later date.

The family of Ronald Dennis Eckler created this Life Tributes page to make it easy to share your memories.

Send flowers to the Eckler family.