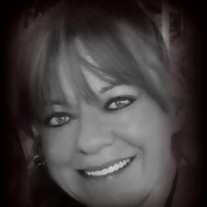 Roxanna "Roxi" Louise (Kallsen) Wigginton, 60, of Greeley, formerly of Nunn passed away Saturday, August 15, 2020. She was born on February 20, 1960, in Greeley, to Alvin Charles "Red" and Rhea Louise "Gillette" Kallsen. She lived her entire life in Nunn and attended Highland Elementary and Highland High School in Ault, Colorado. She married Joseph E. Fitch in Colorado, on April of 1977, and he preceded her in death on February 9, 2010. After raising six children: one daughter and five sons. She later divorced and met and married Paul Edward Wigginton in December of 1998. She drove a school bus for ten years for Highland School District where she made many lasting friendships with students and faculty. She was extremely talented in the world of arts and music. She enjoyed crocheting, needle work, cooking, baking, cake decorating, and gardening. Her greatest treasures were her children and grandchildren. She is preceded in death by her parents, a brother, Michael D. Kallsen, and great nephew, Karter James Hottell. She is survived by her husband, Paul E. Wigginton of Nunn; Mother in law, Carol Wigginton of Oklahoma, her six children; Amanda J. Fitch Scheere and husband, Mark of Eaton; Joseph A. Fitch of Brighton; Nicholas D. Fitch and wife, Brittney of Fort Collins; Justin L. Fitch of Eaton; Dusty L. Fitch and wife, Tiffany of Milliken; Matthew T. Fitch and wife, Kayla of Wray, Co. The loves of her life were her fourteen beautiful grandchildren; Faith, Arabella, Levi, Emma, Tristan, Cash, Jett, Krew, Bailey Jo, Elusion, Jude, Jemma, Jonna, and another grandson due in November, Raylan, a sister, Kimberly K. Myers and husband, Steve of Cedar City, Utah; a brother, John L. Kallsen of Lake Charles, Louisiana; numerous beloved nieces, nephews, along with great nieces and nephews. A Celebration of Life for Roxi will be held at 2 p.m. on Saturday, August 22, 2020 at the Nunn Park in Nunn, Co off Lincoln Ave and 3rd Street. Roxi’s family would like to extend a special thanks to Pathways Hospice and the staff at Fairacres Manor for their care and love of Roxi during her stay with them. An online guestbook and obituary available at www.moserfuneralservice.com.

The family of Roxanna L. Wigginton created this Life Tributes page to make it easy to share your memories.

Send flowers to the Wigginton family.