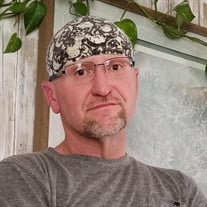 Scott Brian Huff, "Scooter" 53, of Greeley, passed away on Wednesday, March 9, 2022, at The University of Colorado Hospital in Aurora, Co. Scott was always giving and helping family, friends, and strangers and even in his passing he continued to give. His liver was received by someone on the organ transplant list and his pancreas to aid in the research of diabetes. Scott was born February 1, 1969, in Greeley to Deana Huff. His mother married Chuck Burman who raised Scott as his son. He grew up in Ault, Co and lived throughout Northern Colorado. Scott graduated from Highland High School in Ault in 1987. Scott married his first wife Laura in 1993 and was married to her for 8 1/2 years. Scott met and married his second wife Sherry in 2002 and they had 1 son together, Tyler Huff. Scott met and married his third wife Shantel in 2003 and together they blended their families raising 3 sons Tyler, Dakota and Jessie. Scott was the proud grandpa of 2 grandsons, Bentley and Nolan. Scott started working at a young age as a janitor for the Fort Collins mall. He worked for many years as a maintenance supervisor for Everett company and CDSI and a property supervisor for Property Technica. Scott then worked as a steel erector and helped build Rapids Stadium in Denver. He also was a supervisor in the oil field for many years. For the last 8 years he has been in the maintenance department at JBS in Greeley. For the last 5 years he has been a supervisor in maintenance and worked with some great people and friends. Bob Evans, Kirk Hayley, Donald Shine and Charles Chestnut just to name a few. Scott loved playing high school baseball and football for the Highland Huskies. Even after graduating he played softball on different teams throughout his 30's. He has always had a great love for the Denver Broncos and The Rockies. Scott loved being outdoors hunting and fishing. He loved just being in the mountains, that's when he was at his happiest. Scott passed on his love and knowledge to all of his sons and grandsons. Scott loved life and lived it to the fullest. Every orange sunset over the Rockies will be a beautiful reminder he's watching over us. Scott is survived by his sons Tyler Huff, Dakota and Jessie Beckwith. Both of his grandsons Bentley and Nolan Beckwith. Cousins Tammy, Bobby and Jase Pendry. Robbie, Chris, Jen and many other cousins. His uncle Tim Huff, Grandpa Robert Huff. Scott in preceded in death by his grandma Ellen Huff. Mother and father, Deana and Chuck Burman. His aunt Michelle Huff. His uncles Dana, Harry and Kermit Huff. His brothers David and Doug Burman. Best friends Danny Martinez and Freddy Gonzales. Visitation and services will be from 4pm to 7pm, Tuesday March 15, 2022, at the Moser Funeral Service Chapel, 3501 S. 11th Avenue in Evans.

Scott Brian Huff, "Scooter" 53, of Greeley, passed away on Wednesday, March 9, 2022, at The University of Colorado Hospital in Aurora, Co. Scott was always giving and helping family, friends, and strangers and even in his passing he continued... View Obituary & Service Information

The family of Scott Brian Huff created this Life Tributes page to make it easy to share your memories.

Scott Brian Huff, &quot;Scooter&quot; 53, of Greeley, passed away on Wednesday,...

Send flowers to the Huff family.