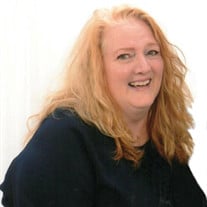 Shairan Elizabeth Whitman, 68, of Greeley, passed away on Thursday, December 17, 2020 at Poudre Valley Hospital in Fort Collins. She was born June 13, 1952 in Omaha, Nebraska to Stanley Oliver & Jeanne Elizabeth (Wilson) Smith. She graduated from Omaha South High School. In April of 1986, she married Alvin LeRoy Whitman, Jr. in Greeley, Colorado. Shairan worked for over 20 years with the Colorado Judicial Branch, 19th District as an account manager. She attended Mountain View Church and was a member of the Historical Club. A talented artist she enjoyed working with pencils and oils. Her hobbies included rock collecting and her dogs. She is survived by her husband, Alvin Whitman, Jr., her brother, Michael (Pam) Smith of Blair, Nebraska, and sisters, Janet (John) Cswercko of Callender, Iowa and Chris Sutherland of Blair, Nebraska. She was preceded in death by her parents, Stanley & Jeanne Smith. A celebration of Shairan’s life will be from 2-5:00 p.m., Sunday, June 13, 2021 at the Bunk House at Island Grove Park, 607 N 15th Ave, Greeley, CO 80631. Memorial contributions may be made in Shairan’s name to the Weld County Humane Society, in care of Moser Funeral Service, 3501 S. 11th Ave., Evans, CO 80621

The family of Shairan Elizabeth Whitman created this Life Tributes page to make it easy to share your memories.

Shairan Elizabeth Whitman, 68, of Greeley, passed away on Thursday,...

Send flowers to the Whitman family.