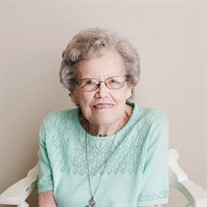 Syvilla “Susie” Larson passed away surrounded by her family on Saturday, February 8, 2020. She was born on August 23, 1934 in Fort Collins, Colorado. She married Carl Laurie Larson on July 24, 1955, and together they lived and farmed in the Eaton area. Through this union they had five children: Keith Larson, Diana (Kent) Seele, Bernice (Steve) Westerholt, Janine (Mike) Freeman, and Doug (Pat) Larson. Her life was spent on the farm helping Laurie while raising the five children. When the children left home, she went to work at the Eat’n Place and then with her daughter, Janine, at J-9 Crop Insurance. Susie graduated from Fort Collins High School and attended Colorado A & M, now Colorado State University. After two years, she moved to Omaha, Nebraska and attended United Airlines Flight School to become a reservation agent. Upon completing flight school, she moved to Chicago and worked for United Airlines. As a very active 4-H member in her youth, she encouraged her children to be in 4-H where they exhibited in sewing, cooking, and showing cattle. Her other hobbies included reading, embroidery, and watching the Denver Broncos and CU Buffaloes. She was a member of First Lutheran Church in Ault, Colorado. Her surviving relatives are her five children, thirteen grandchildren including: Kendall (Josh) Robinson, Andrea (Marcus) Podtburg; Erin (Mason) Marick, Kara (Shawn) Winters, Korie Larson; Tiffany Westerholt, Tarissa Westerholt, Tanner Westerholt, Trevor Westerholt, Pete Freeman and fiancée Tabitha Baptista, Lynsey (Dave) Henson, Jason (Katlynn) Larson, and Jared (Brooke) Larson. She also leaves behind 10 great grandchildren. In addition, her sister Sandy Powell, her sister-in-law JoAnn Burr, and two nieces and one nephew. Preceding her in death was her husband of 60 years Laurie Larson, her brother Bruce Fraser, and her three brothers-in-law, Jake Burr,Lenny Larson, and Dave Powell. Memorial Services will be held at First Lutheran Church in Ault, Colorado, on Thursday, February 13, 2020, at 11:00 am with public viewing at 10:00 am. Donations can be made to First Lutheran Church.

The family of Syvilla "Susie" Larson created this Life Tributes page to make it easy to share your memories.

Syvilla “Susie” Larson passed away surrounded by her family on...

Send flowers to the Larson family.