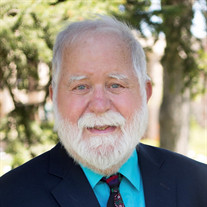 Terrence (Terry) Wayne Jares, age 70 of Eaton, CO passed away in his home on Tuesday, Sept 4, 2018. He is survived by his loving wife Mary and daughter Tricia and 6 grandchildren. Terry was interested in photography, hunting and camping but his real passion was supporting his daughter. He was the ultimate “dance Dad” rarely missing a practice, performance or competition of Tricia’s dancing career from age 3 to graduating high school. No child or parent at the studio was a stranger to Terry. He always told Tricia she was his Princess perfectly pretty in pink and purple and everything else. Her daddy will be with her spiritually as she walks down the aisle to marry Scotty Newman. Terry was born in San Antonio, Texas on January 25th, 1948 to B.V. and Josephine (Lednicky) Jares. He was a lifelong learner graduating from St John’s Seminary in San Antonio and receiving a Bachelor’s and Master’s Degree from Texas A&M in forestry and plant pathology. He furthered his education at the University of Michigan, Cornell University and Syracuse University. He also attended Officer Candidate School in the National Guard/US Reserves serving as a Captain in the Military Police. He began his career researching and working as a system analyst for many companies. His last several years he contracted with the USDA managing and troubleshooting their computer programs. He retired in 2016 and promptly took up beekeeping. He immersed himself in learning from the local experts at Rice’s Honey and joined the Northern Colorado Beekeepers Association and went to “Bee College”. It quickly became his passion and the center of many of his conversations. Terry was always active in community events having been an Eagle Scout in his youth. After moving to Colorado, he joined the Sertoma Club and spent many years serving as Governor to Colorado and Wyoming Clubs with emphasis on Project Self Sufficiency assisting struggling young adults to be successful among other things. No child or dog was ever a stranger to Terry. In his local community of Eaton, Terry was one of the founding members of the Eaton Days Committee. He worked with the town and school as he organized the town Easter Egg Hunt for over 20 years with over 400 children attending this popular event in 2018. He delighted children and adults alike during the holiday season with his portrayal of Santa serving many years as the Eaton Fire District Santa during their annual family Christmas party. The twinkle in his eye and the often heard “ho-ho-ho” made many wonder if he was really pretending. Terry had many health problems the last couple of years, losing his leg to an infection last year. Terry appreciated every health care provider from nurse, doctor, therapist, prosthetist to pharmacist. Everyone that encountered him was endeared by his hard work and great attitude. Our wonderful neighbors have supported Terry and family by coming together and building a wheelchair ramp on the 4th of July, just days after his amputation in 2017 and being there every day with food, love and support. Funeral services will be held at Moser Funeral Service, 3501 S. 11th Avenue, Evans, CO. Visitation on Thursday, Sept 13, 2018 from 4-7 p.m. and Funeral at 11 am Friday, Sept 14, 2018 followed by burial at the Eaton Cemetery and a reception to celebrate his life at the Eaton Community Center. In lieu of flowers, donations may be made to the Northern Colorado Bee Association in care of Moser Funeral Service.

Terrence (Terry) Wayne Jares, age 70 of Eaton, CO passed away in his home on Tuesday, Sept 4, 2018. He is survived by his loving wife Mary and daughter Tricia and 6 grandchildren. Terry was interested in photography, hunting and camping but... View Obituary & Service Information

The family of Terrence "Terry" Wayne Jares created this Life Tributes page to make it easy to share your memories.

Send flowers to the Jares family.