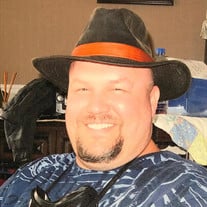 Thomas Dean Mathews, 52, passed away on Thursday, October 14th, 2021, at his home of Gilcrest, Colorado. He was born on February 4, 1969, in Galesburg, Illinois, the son of Geral and Sharon James Mathews. Survived by his sister: Renee Mathews, Bloomington, IL: and brother: Derek (Wanda) Mathews of Poplar Grove, Illinois. Niece: Lily Mathews and Nephew Liam Mathews. His Mother: Sharon Mathews of Galesburg, Illinois. His father, Geral, preceded him in death. He was raised in Gilson and educated in Knoxville, Illinois, graduating from the Knoxville High School in 1987 where he played football and was the recipient of the Billy Roe and Hitman awards. He attended Knox College in Galesburg, Illinois and was involved in the Beta Theta Pi fraternity. He played linebacker for the Siwash football team. He worked for Gates Rubber Company of Galesburg, Illinois. He then moved to Colorado in 2001 to work for CTL Thompson in Denver till present. His hobbies included: fishing, watching football and drag racing as well as attending over a dozen ZZ Top concerts over the years. His love of cooking was enjoyed by many which included homemade tenderloins, various smoked BBQ meats and entrees. He also produced his own BBQ dry rubs he called “Git Sum” and “Black Magic”. As Tom traveled around the country, he was always accompanied by his Eric Cartman doll. Cremation Rites will be accorded, and private inurnment will be in the Haynes Cemetery in Rural Delong, Illinois at a later date. The family is also planning a Celebration of Life in Illinois at a later date where family and friends of Colorado and Illinois are welcome. In lieu of flowers, memorials may be made to the Knox County Humane Society (Illinois) or the Galesburg Rifle Club, Inc (P.O Box 1190, Galesburg, IL 61402). Tom also donated to USO.ORG and donations can be made on their website. On-line condolences, memories, funny stories, are welcome to be posted on Tom’s social media page.

Thomas Dean Mathews, 52, passed away on Thursday, October 14th, 2021, at his home of Gilcrest, Colorado. He was born on February 4, 1969, in Galesburg, Illinois, the son of Geral and Sharon James Mathews. Survived by his sister: Renee Mathews,... View Obituary & Service Information

The family of Thomas Mathews created this Life Tributes page to make it easy to share your memories.

Send flowers to the Mathews family.