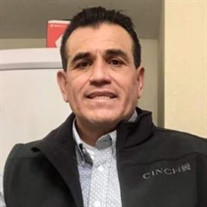 Thomas “Tommy” Talamantes, 57, of Greeley, passed away on Thursday, March 31, 2022, at UC Health in Greeley. He was born May 11, 1964, to Abelardo & Oralia (Alvarado) Talamantes in Greeley, Colorado. He graduated from Greeley Central High School and continued his education at Aims Community College. He started his career as a roofer at the age of 16 with Joe Alonzo. He later worked as a foreman for many years at Douglas Roofing. He married Sanjuana Naranjo in Greeley and has resided here since 1977. Thomas was a die-hard Dallas Cowboys fan. He enjoyed playing pool and spending time with family. He loved walking with his wife and his dogs Kiki and Max. He is survived by his wife, Sanjuana Talamantes, his parents, Oralia Cota (Juan Montoya) Abelardo (Nora) Talamantes, sons, Anthony (Susan) Talamantes, and Bryce (Annie) Talamantes, Stepsons, Jonathan (Erica) Morado and Martin Morado, a stepdaughter, Samatha Montoya, brothers, Steven (Janelle) Talamantes and Michael Talamantes, a sister, Sylvia (Bruno) Felix, 6 grandchildren, and 14 step grandchildren, including a special step granddaughter, Maggie Montoya (we will always have our ears) He was preceded by his brothers, Abel and David Talamantes. Private family services will be held.

The family of Thomas "Tommy" Talamantes created this Life Tributes page to make it easy to share your memories.

Thomas “Tommy” Talamantes, 57, of Greeley, passed away on Thursday,...

Send flowers to the Talamantes family.