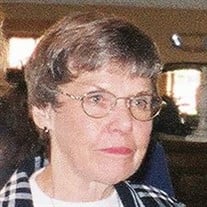 Vivian M. (Kercher) Weber, 88 of Texas formerly of Greeley passed away on Wednesday, August 14, 2018 in Keller, Texas. She was born in Isabelle, SD on December 9, 1929 to Charles and Lydia (Schmidt) Kercher where Charles was working on farms. The family moved to Galeton, CO in 1933 where Charles continued farming. On February 13, 1949, she married Alvin L. Weber in Greeley. Initially, Vivian and Alvin lived in the Severance area where he worked for various farmers from 1949 to 1959. Late in their farming career, they moved onto the Weber family farm where Alvin farmed for his parents. They were blessed with four daughters during this period, one of which passed away shortly after child birth. In 1959, Vivian, Alvin, and their three daughters moved to Greeley where Alvin worked at the Monfort Packing Plant. They became members of St. Paul’s Congregational Church where Vivian was involved in the women’s auxiliary and could often be found helping make noodles and cakes. She worked at several jobs, most notably for the Weld County Health Department and in the cafeteria at the University of Northern Colorado. After Alvin’s passing in 2006, Vivian remained in Greeley. In 2010, Vivian moved to Grapevine, TX to be closer to family, grandchildren, and great-grandchildren. Survivors include three daughters, Sandra Schneider and husband Tom of Colleyville, TX, Karen Jordan and husband Robert of Tavares, FL, and Denise Weber of Maryland Heights, MO; two grandchildren, Todd Schneider and wife Chanda with a son Sebastian of Missouri City, TX, and Amy (Schneider) Wilson and husband Rusty with three daughters Ella, Marie, and Ivy of Lafayette, LA; brother Verlin Kercher with wife Karolyn of Colorado Springs, CO; and various nieces, nephews, and friends. She was preceded by her parents, a daughter Bonnie Jean Weber; sisters Lillian (Kercher) Shuler, and Violet (Kercher) Gneiser; and brothers Elmer Kercher, Floyd Kercher, and Marvin Kercher. Visitation will be 4:00 - 7:00 p.m. on Thursday, August 23, 2018 at Moser Funeral Service Chapel, 3501 S. 11th Avenue in Evans, Colorado. Services to celebrate her life, 10:00 a.m. on Friday, August 24, 2018 at St. Paul’s Congregational Church, 1525 43rd Avenue in Greeley, Colorado Interment Sunset Memorial Gardens in Greeley. Memorial gifts may be made to TRU Hospice and Palliative Care of Northern Colorado in care of Moser Funeral Service, 3501 S. 11th Ave., Evans, CO 80620.

Vivian M. (Kercher) Weber, 88 of Texas formerly of Greeley passed away on Wednesday, August 14, 2018 in Keller, Texas. She was born in Isabelle, SD on December 9, 1929 to Charles and Lydia (Schmidt) Kercher where Charles was working on farms.... View Obituary & Service Information

The family of Vivian Weber created this Life Tributes page to make it easy to share your memories.

Send flowers to the Weber family.