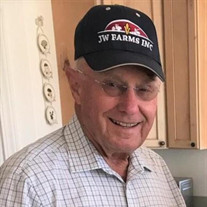 Wayne Earl Thomas, 77, of Greeley, returned to be with his Lord and Savior on Monday, December 14, 2020. Wayne Thomas was born January 6, 1943 to Clifford and Alice Thomas. He grew up in Fort Morgan, riding his horse, Stormy, and farming wheat with his father on the homestead that has been in the family for 100 years. He attended a small country school as a boy and graduated from Fort Morgan High School in 1961. Shortly thereafter, Wayne married Eileen (Foos) on September 12th, 1964, and enjoyed the blessings of a faithful, godly marriage for 56 years. Wayne’s first years with Eileen were in Fort Morgan, working at the Farmers’ State Bank and doing custom farming. In 1969, they moved to Greeley and purchased the home they still reside in after all of these years. Wayne worked at the Monfort Feed Lots for 8 years, and then at the Farm Service Agency for 25 more, measuring acreage and working on farm programs of all types. He met and served many farmers in the area, and made lasting friendships with the staff there. In his retirement years, Wayne collected tractors, tinkered on his machinery, and enjoyed spending time shooting out in the Colorado plains where he grew up. Wayne and Eileen are faithful members of the Evangelical Free Church of Eaton, and were blessed with their fellowship and care. Wayne and Eileen had three children—Janette Lunsford and her husband, Joel; Carrie Ross and her husband Steve; and their son Cliff. Their six grandchildren were the light of his life—Emma, Simon, Hana, Trevor, Noelle, and Brett. In addition to his children and grandchildren, he is survived by his wife, Eileen, and his sister, Linda Staley, who resides in Fort Morgan. A funeral service to celebrate Wayne’s life will be held at 10:00 a.m. on Tuesday, December 22, 2020 at the Evangelical Free Church of Eaton, 1325 3rd Street in Eaton. Visitation will be held on Tuesday from 9:00 a.m. until time of service at the church on Tuesday. A graveside service will be held at 2:00 p.m. on Tuesday at Sunset Memorial Gardens. Memorials may be made to Missions at the Evangelical Free Church of Eaton or Mel LaMar Ministries. They can be sent in care of Moser Funeral Service, 3501 S. 11th Avenue, Evans, Colorado 80620.

Wayne Earl Thomas, 77, of Greeley, returned to be with his Lord and Savior on Monday, December 14, 2020. Wayne Thomas was born January 6, 1943 to Clifford and Alice Thomas. He grew up in Fort Morgan, riding his horse, Stormy, and farming wheat... View Obituary & Service Information

The family of Wayne Earl Thomas created this Life Tributes page to make it easy to share your memories.

Wayne Earl Thomas, 77, of Greeley, returned to be with his Lord...

Send flowers to the Thomas family.