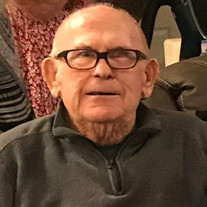 William “Bill” Lee Pryor, 79, of Greeley, passed away on Friday, November 9, 2018 at his home. He was born April 7, 1939 to Lester & Gladys (Sellars) Pryor in Rushville, Illinois. He enlisted in the United States Navy and served from 1958-1962. He married Barbara Ann Edwards on April 24, 1965 in South Dakota. He later lived in Ventura, California before moving to Greeley on November 8, 2003. Bill was employed by the United States Post Office and retired after 33 years. He was survived by his sons, Timothy J. Pryor of Camarillo, CA & Christopher C. Pryor of Ventura, CA, a son-in-law, Charles A. Listello of Greeley, CO, a daughter, Kathryn M. Pryor also of Greeley, CO, granddaughters, Twyla L.C. Pryor of Johnstown, CO & Natasha M. Pryor of Camarillo, CA, a grandson, William B. Pryor also of Camarillo, CA, and numerous nieces and nephews. He was preceded in death by his wife, Barbara Edwards, his parents, Lester & Gladys Pryor, and 9 brothers and sisters. A celebration of Bill’s life will be held on April 7, 2019 in Ventura, CA. An online guestbook and obituary are available at www.moserfuneralservice.com.

The family of William "Bill" Lee Pryor created this Life Tributes page to make it easy to share your memories.

Send flowers to the Pryor family.