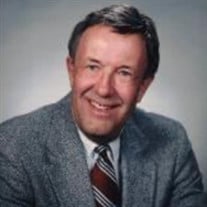 William “Bill” Bullard, 91, of Fort Collins, Colorado, passed away on Thursday, February 3, 2022, at Grace Pointe Senior Care Community, Greeley, Colorado. Bill was born on December 7, 1930, in Loveland, Colorado. He graduated from Englewood High School in 1948 where he met and later married Donna E. DeHart. He owned and ran The Frosted Dutchman Drive-In in Englewood, Colorado for several years. After selling the restaurant, he became an extraordinarily successful life insurance agent and received numerous top performance awards. In the mid-seventies he transitioned into real estate where he worked for the Van Schaack Real Estate Agency in Lakewood, Colorado. He then relocated the family to Fort Collins, Colorado and was among the original realtors with The Group, Inc. real estate firm and later joined REMAX real estate. He attained his appraisal certification and owned and operated Bullard Appraisals. He continued his career until his retirement in 2007. Bill was an avid gardener and was particularly proud of his beautiful raspberry bushes. He was a member of St. Joseph’s Catholic Church in Fort Collins. Survivors include three sons and one daughter: Doug Bullard, Severance, Colorado, Steve Bullard (Judy), Durham, North Carolina, Becky Ochsner (Lonnie), Greeley, Colorado, and Tim Bullard (Maureen), Timnath, Colorado. Bill is also survived by 10 grandchildren and 12 great grandchildren. He was preceded in death by his parents Todd and Marie Bullard, his wife Donna, a sister JoAnn Jeffers, and a son Greg. A private family service to celebrate Bill’s life will be held at a later date.

The family of William Clay Bullard created this Life Tributes page to make it easy to share your memories.

Send flowers to the Bullard family.