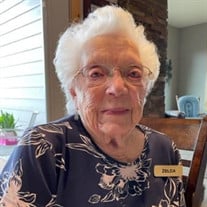 Zelda Arlene Peterson, 101, of Windsor, formerly of Eads, Colorado, passed away on Wednesday, March 30, 2022, at the Greeley Village. Early on May 20, 1920, Zelda Arlene was born to parents, Glen, and Edith (Barber) White. She was born on the land that her father homesteaded in 1903, located 12 miles northeast of Eads, Colorado. She was the oldest of 9 children and she was the last one to pass away. She attended Rush Creek School, a one room school, through 8th grade then attended Eads High School, graduating in 1937. Following graduation, she attended Blair Business School in Colorado Springs, CO. While living in Colorado Springs, she met Carl R.N. Peterson. They were married September 14, 1940, in Florence, Colorado. A son, Frances Leroy was born July 22, 1942. He died in July 1944. They lived in the Manitou/Colorado Springs area until 1944 when they moved to Eads to help Zelda’s father on the farm. Although Zelda was not excited about moving back to the plains, she endured and lived on the farm until September 2005, following Carl’s death. During this time, she was not only a homemaker, but also a secretary at Eads Schools and a bookkeeper at Parker Implement Supply in Eads. She was involved in 4-H as a leader, Home Demonstration Club, worked at the Kiowa County Fair and was a judge at area county fairs. She also volunteered at the bowling alley, keeping score for the young bowler’s league. She was also a member or attended the Eads Christian Church, the Eads Evangelical United Brethren Church, and the Eads Methodist Church. She taught Sunday School and was a pianist for church services. In 2005, she moved to Greeley, Colorado to be closer to her daughter. She enjoyed many church activities and became a member of Faith Lutheran Church in Eaton, Colorado. She moved to Good Samaritan Senior Living Resort in Windsor, Colorado April 2011. Due to declining health, she moved to Greeley Village Assisted Living February 28, 2022. She entered eternal life March 30, 2022. She is survived by her son, Norman Peterson (Marcia) of Windsor, Colorado, daughter, Janette (Virgil) Kochis of Matheson, Colorado, and Charlotte (Gary) Billings of Windsor, Colorado, seven grandchildren: Norman Jr., Kathryn, Jeffrey, Pamela, Michael, Amy, and Andrew, ten great-grandchildren, Peyton, Andrew, Kaitlyn, Devaughn, Brayden, Kayla, Ayden, Elias, Abbie, and Emma, several cousins and nieces and nephews. She is preceded in death by her parents, Glen and Edith White, sisters, Janet Nylene White, Velma Louise Absher, and Anise Patricia Gilford, five brothers, Glen Eugene White, Allen Leroy white, and three infant brothers, and three infant grandchildren. In lieu of flowers, memorial contributions may be made in Zelda’s name to Charter Healthcare, 1562 Taurus Ct. Loveland, CO 80537 or to any other charitable organization of your choice. Graveside services will be held at a later date.

Zelda Arlene Peterson, 101, of Windsor, formerly of Eads, Colorado, passed away on Wednesday, March 30, 2022, at the Greeley Village. Early on May 20, 1920, Zelda Arlene was born to parents, Glen, and Edith (Barber) White. She was born on... View Obituary & Service Information

The family of Zelda Arlene Peterson created this Life Tributes page to make it easy to share your memories.

Send flowers to the Peterson family.