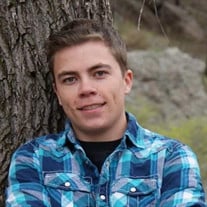 Zachary ( Zac )Thomas Foster was born on March 11th, 1996 and went to be with the Lord on June 26th, 2020. He was a beloved son, brother, uncle, cousin and friend, and while his time with us was short, his impact was far-reaching. He attended kindergarten at Eaton Elementary and his teacher Mrs. Benson, became a life-long friend. That was the effect Zac had on people. The remainder of his school years were comprised of Options home school enrichment program, and Aims Community College concurrent enrollment program where he received an Associates Degree. At the time of his death he was working for Atlantic Engineering Group ( AEG ), while pursuing his dream of building a market garden. Zac was a steadfast witness for the Lord and displayed this in his many mission trips beginning in Jr. High that took him to Haiti, Los Angeles, NYC, and the Czech Republic. He also volunteered at the Alpha Center, a Christian Medical Clinic in Ft. Collins. He will always be remembered for his love of all living things – people, plants, and animals. However, his love for the Lord surpasses those and although he was a man of few words, he was well known for his love of Christ. He was a person who spread goodness wherever he went. He enjoyed traveling immensely and outside of his mission trips had also traveled to many parts of Europe. He was funny, witty, smart, accomplished, and reliable. He was always available for family and friends. He was a person of true integrity and will be missed in ways we can’t even imagine. Zac was preceded in death by his grandparents Merritt Jr. and Jessie Lewis; Eddie and Clare Foster; uncles Don (Sandy) Foster and Dave Lewis; Aunts Val and Cathy (Steve) Foster. He is survived by his parents Dan and Teri Foster, brother Marc, and sister Shannon; niece Tihana ; and numerous aunts, uncles, cousins and countless friends, especially Caleb Leonard and Tim Blandin, along with parents Dale and Michelle Leonard who were like second parents to him; and many of his close co-workers at AEG and NAGR who were like brothers and sisters to him. Additionally, Zac leaves behind numerous 4-legged, furry, and feathered friends who held a very special place in his heart. A celebration of Zac’s life will be held Friday, July 10 at 1:00 p.m. at Eaton Evangelical Church, 1325 3rd Street in Eaton. Interment Eaton Cemetery. Please dress casually if you wish. In lieu of flowers, contributions may be made to https://www.thealphacentercollective.org/ in Zac’s name or checks made to the Alpha Center in care of Moser Funeral & Cremation Service, 3501 S. 11th Avenue in Evans, CO 80620. An online guestbook and obituary are available at www.moserfuneralservice.com.

Zachary ( Zac )Thomas Foster was born on March 11th, 1996 and went to be with the Lord on June 26th, 2020. He was a beloved son, brother, uncle, cousin and friend, and while his time with us was short, his impact was far-reaching. He attended... View Obituary & Service Information

The family of Zachary Thomas Foster created this Life Tributes page to make it easy to share your memories.

Send flowers to the Foster family.